Type your search terms above and press return to see the search results.

Here’s what we learned  in  our research/kitchen time this week:

If you’re curious to hear how Hungarian sounds as sertéspörkölt is being made, here you go!  He makes his a little differently from how I make mine, but the recipe is fairly similar.

Calvin researched Hungarian soups for about 4 seconds before pointing at a photo of Pörkölt and saying, “that’s it!  Let’s make that!”  Okay kid.

It took me a few tries to get this recipe right – it was good the first night, but kind of a pain to make, so I retooled the recipe and made it again the next night.  Everyone agreed that not only was the stew better, but it was WAY easier and produced many fewer dishes!

Calvin was eager to help my chop all the onions required for this dish because I’d told him about a theory that chewing gum keeps you from crying while chopping onions.

The verdict: it works!

The big issue with this meal was my attempt to make a gluten-free version of traditional Hungarian nokedli which are basically spaetzle.  My first several attempts were actually laughably bad, but the last version (a modified version of THIS recipe) actually worked okaaaay, but I didn’t think it was good enough yet.  We all liked the pörkölt better with the pasta, but just to prove that I made my own nokedli (no matter how bland they were) here is photo proof! 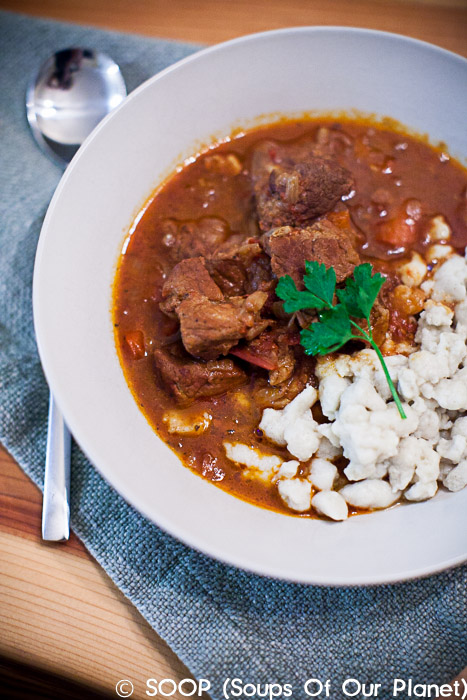 Okay, so side aside, this is a TOTAL keeper recipe.  Even after eating it for dinner two nights in a row, everyone agreed that this should go into regular rotation.  Even my soup-reluctant husband said I should make it again.  This is the PERFECT fall/winter dish that will simply simmer all afternoon and make you feel all warm and cozy when you eat it.  Next time, completely divergent from traditional pörkölt, we will make a gremolata (chopped parsley, fresh garlic, and lemon zest) to bring a little zing to the finished product.  Oh, and the pepper relish from Comoros (poutou) was pretty stellar with this dish too.  Hungarian/Comoran fusion cooking…. coming soon to a kitchen near you!

Finally, though this would have been stellar with a red wine, the only Hungarian wine we could find this

weekend was a fantastic white from the foot of the Mátra mountains.  This description from the importer nails it:

Originally crossed in 1930, the parents of this native grape are Gewürztraminer and Muscat Ottonel. Not surprisingly, it’s incredibly perfumed and floral. That said, its not fat and weighty on the palette like Gewürztraminer can often be and has there’s no detectable residual sugar either. The finish has a mineral, almost saline quality that balances out the Muscat heavy aromatics. And while the style is decidedly reductive, it opens up right away and jumps out of the glass even when chilled. While it can easily stand alone as an aperitif, it pairs beautifully when fruit and salt play off of each other. Prosciutto and melon is a classic, but we’ve also found that Indian food (especially chutneys) pairs extremely well.

You can get  wines from along the Danube from these guys including the Irsai Oliver we loved this weekend. 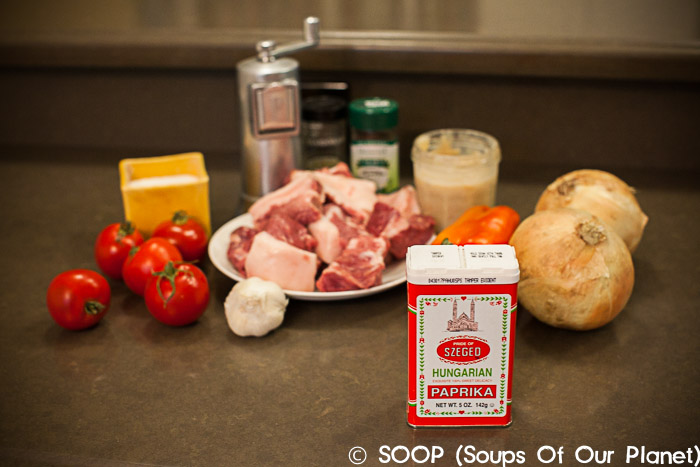 * If you can’t find a banana pepper, yellow gypsy peppers or yellow, green or red bell peppers would work.  We used red pepper and chopped it small to hide it from our boys who think they don’t like peppers.

* Unless you are in the middle of tomato season, use canned tomatoes as they will have much more flavor that the flavorless winter tomatoes.  We used dry farmed tomatoes which are possibly the most delicious thing on the face of the planet.

* Hungarian paprika is very different from the standard paprika you can find at the grocery store.  It is not expensive and totally worth seeking out.  It comes in “sweet” and “hot”.  Here’s more about paprika.

Traditionally, this would be served with a spaetzle-like pasta called nokedli.  I tried 4 different times to perfect a gluten-free version of nokedli and finally gave up and served it over Jovial’s gluten free egg tagliatelle.